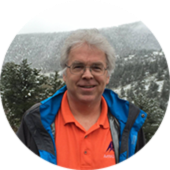 Michael Selig is a Professor Emeritus of Aerospace Engineering at the University of Illinois at Urbana-Champaign (UIUC). He is the President of InertiaSoft, Inc - a software company that specializes in realtime flight dynamics simulation. He has published widely in the areas of low-speed aerodynamics and leads the FS One RC flight simulator project.

He has worked and consulted on the design and aerodynamics of unmanned aerial vehicles/systems, kilowatt through multi-megawatt scale wind turbines, record-breaking high-altitude solar powered aircraft, wing-sail and appendage design for the America’s Cup, front and rear wing designs for IndyCars/CART and Formula 1, and many other areas.

He won the AIAA Aerodynamics Award for his research in applied aerodynamics.

His RC flight simulator FS One is widely used and one of the most well known RC simulators in model aviation.

He has also consulted as an expert witness in aviation litigation. As a consultant, his experience has also been applied to better understand aircraft loss of control in one of the worst aviation accidents in US history.

Overview of the Rest of this Site

Below are listed (in first person) many resources that he has made available online, with the first being his most active current project (FS One) and the last being one (airfoil coordinates site) that he started online in 1995 and still runs to this day. The links at left are his points of contact online.

Use the list at right to navigate this page.

FS One is an RC flight simulator freely downloadable online. It has over 140 airplanes and over 35 flying sites. Aerodynamics, ground reactions, and wind/turbulence modeling are its strengths. 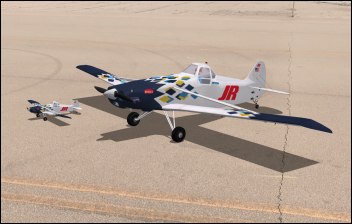 FS One is a realtime pilot-in-the-loop RC flight simulator for anyone interested in model aviation at any experience level. It has also been used in research and in the commercial aerospace domain. It specializes in simulating +/-180 deg high angle of attack and high side slip flight, including aerobatics such as upsets, stalls, spins, knife edge flight, etc. The simulator includes power planes and sailplanes ranging from beginner-level trainers to highly advanced model aircraft. It has been used extensively in UAS/UAV development. A unique feature is the physics-based scaling method integrated into the simulator. It can be used to resize any airplane with its physics to any size - going down to tiny micro UAV sizes up to full scale and larger. FS One is written in the C++ software language, and it has been in continuous development since 2003. It was first commercially released in 2006. Find it online at https://www.fsone.com and https://www.youtube.com/michaelselig. 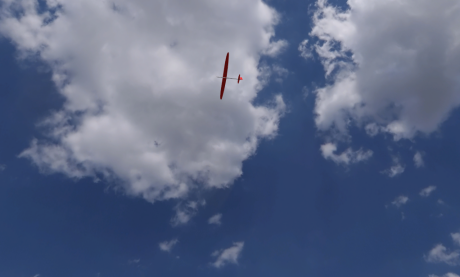 Airfoils used on model aircraft and also modern day small UAS often fly at low speeds. The combination of small vehicle size and low speed flight, or slow flight at very high altitudes, results in the wing and tail surface airfoils operating in a more “viscous” environment, or technically speaking operating at low Reynolds numbers where the aerodynamics becomes more difficult to understand and predict. Important experiments were done by my UIUC Applied Aerodynamics Group to explore this aerodynamics regime and publish the results. With the support of many model aviation enthusiasts, research sponsors, campus, and the combined work of legions of UIUC students maintaining the testing know-how and equipment, the UIUC LSATs program ran for approximately 25 years. It yielded low Reynolds number airfoil wind tunnel data on over 200 airfoils. The airfoil lift, drag, and pitching moment data are documented in six book-sized publications and are freely downloadable from my campus site. The precursor to these tests was done at Princeton University over a several year period around 1987, and the work produced the SoarTech publication “Airfoils at Low Speeds” book, which is also freely downloadable from my campus site.

In 2003, we started plans to add propellers to the low Reynolds number aerodynamics test campaign. At the time, research quality data on low Reynolds number propellers was scare. Also, interests in small-vehicle electric flight and battery limitations (before the Lipos were ubiquitous) made knowing the performance of propellers more important than ever. From the first publication of data in 2005 through to 2022, the propeller database has grown to over 4 volumes of data and around 250 propellers tested over a range conditions. All the data is freely available online at the UIUC Propeller Data Site. 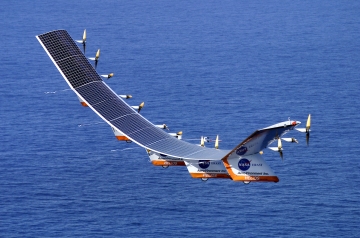 PROFOIL is an inverse design code for low speed airfoils released on github. At its core, the theory used in PROFOIL is closely related to that used in the Eppler airfoil code dating back to 1957. With PROFOIL, the airfoil designer prescribes the desired velocity distribution and the method then backs out the airfoil shape, subject to any other specifications that may be prescribed, such as airfoil thickness or pitching moment, and much more. My code was part of my PhD thesis in 1992. I put a simplified version of it online in 1997. PROFOIL has been used to design airfoils for model aircraft, UAVs/UASs, homebuilt aircraft, large and small wind turbines, keel and wing foils for the America’s Cup and other racing yachts, and Indy cars and Formula 1. Sponsors of my campus research on airfoil design have included NASA, AeroVironment, Boeing, Naval Research Lab, GE, Siemens, Northern Power Systems, Ford Motorsports, Newman/Haas Racing, Jaguar Racing and Oracle-BMW Racing, Farr Yacht Design and many others.

PROPID is an inverse design code for horizontal axis wind turbines. Ongoing development since 1993. Used in the design of small to megawatt scale wind turbines. 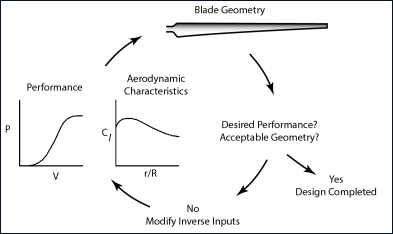 PROPID is a downloadable computer program for the design and analysis of horizontal axis wind turbines (HAWTs). With PROPID, the designer can specify the optimal blade aerodynamics and from that let the method work backward to find the shape of the blade. This approach generally is called an inverse method – flipping the problem around and specifying the output to then get back what is usually the input. Taking this approach is much faster than design by direct analysis where the geometry is input and then manually and iteratively modified to achieve the best performance. Recently, PROPID has been used in research to design highly flexible large downwind ultralight rotors for offshore wind power [pdf].

Coordinates for over 1600 airfoils online. Hosted at UIUC since 1995 and growing. Includes a companion page that lists many airfoil resources available. 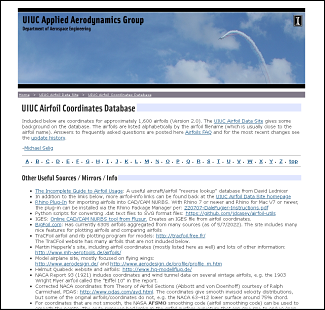 For airfoil coordinates, the UIUC Airfoil Coordinates Database is a good place to start. It is part of my UIUC Airfoil Data Site. The site currently includes coordinates for over 1600 airfoils. According to Google Analytics, the site receives between 10,000 and 20,000 unique visitors per month, depending on the time of year (winter in the northern hemisphere is peak airfoil hunting season). The site started in year 1995 with many of my own airfoils (which were previously distributed by email, Gopher/WAIS, mail and in print media). Since then the site has continued to grow with contributions from many people, and the coordinates have populated more and more new online airfoil databases - many with unique and useful features worth checking out. My site also hosts David Lednicer’s page: The Incomplete Guide to Airfoil Usage that lists the airfoils used on a great number of airplanes. 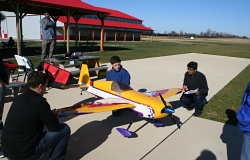